Thank you to everyone who had supported me over the past 8 years. I sincerely appreciate my community and everyone in it. We live in a wonderful place. I'm glad I had the opportunity to help a little bit during my tenure.

Down on the Earl Farm: Nourishing the Community, One Cow at a Time 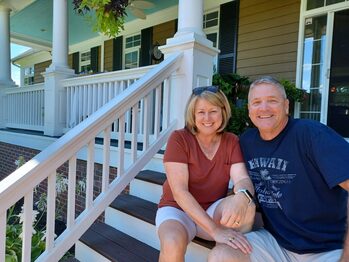 Written by Doug Goodnough for the Hillsdale College Blog

​Brent Earl, ’89, a former two-sport standout in Charger football and baseball and Delta Sigma Phi member, spent his childhood shearing sheep, cleaning horse stalls, and bailing hay on the farm that has been in his family since 1864. He had no intention of making farming his career after receiving his business administration degree from Hillsdale College.
“Gosh, no,” he said.
Earl currently works remotely as a full-time sales executive for dairy.com, a leading provider of technology and service platforms, from his home on Earl Farm in Howell, Michigan. In 2001, Brent and his wife, Jennifer, decided to move back to the farm to raise their family and embrace the farm experience. His remote work with dairy.com allows him to stay active both on the farm and in the community.
When the Earls moved back to the farm, they desired to enhance their farm experience. “We wanted to have some cows, so we bought a couple of them,” Brent said. They eventually added turkeys and chickens, and their “couple of cows” turned into a small herd. The Earls also desired to connect with the community, so they started hosting “porch lunches.”
Their spacious porch is complete with comfortable furniture and breezy ceiling fans. Almost every Friday during the summer months, people can register for a porch lunch on their website to come over for a free meal and conversation.
Usually the Earls limit the amount of lunch guests to six or fewer to allow for a more personalized environment. Besides sampling the menu that includes beef from the family farm and an impressive spread of garden-fresh fruit and vegetables, guests are treated to a time of engaging discussion.
Beyond the homestead’s sprawling front porch with panoramic views of the farm, Brent’s wife, Jennifer, an English teacher at the local middle school, learned that food insecurity was an issue in Livingston County. So the Earls decided to donate one cow per year to provide hamburger to local food pantries.
That’s when the Earl Farm Foundation happened. The Earls organized fundraisers that would raise money to purchase one-pound packages of hamburger for the pantries. “We’re almost up to 50 cows (donated) in the last five years,” said Brent.
Along with the foundation, the Earls started the “Neighbors Feeding Neighbors” campaign that allows people to assist their foundation on a monthly basis. In 2020, during the COVID-19 pandemic, the foundation raised $38,000 and delivered 9,500 pounds of beef to local pantries. That increased in 2021, and it is on pace to eclipse that mark in 2022. In early August, the farm hosted an unusual and unique fundraising event—a vintage baseball game and ice cream social.
Transforming the homestead’s expansive front yard into a makeshift baseball field, the Earls recruited players for the home team, including fellow Chargers Brian Buckley, ’87, John Chapel, ’89, Jay Tobin, ’88, and Jon Palazzo, ’90. The event raised $21,000, with more than 200 people attending.
For more than 20 years, the Earls have embraced the farm experience with a passion to give back to their community. Their homestead has grown beyond expectations and has become a social gathering spot for family, friends, and the local community. But beyond their generosity, their family farm has been a classroom for their four children to learn the lessons of hard work, family, and being good stewards of the land. Brent and Jennifer recently became grandparents, and they hope that one of their four children will one day take over the Earl Farm, continuing a legacy of fostering generosity and camaraderie in their community.

Howell High forever, we will always be.
Faithful and loyal, in our love for thee. RAH! RAH! RAH!
Hail, hail, the gangs all here, round our colors bold.
We'll stick together for our dear green and gold!